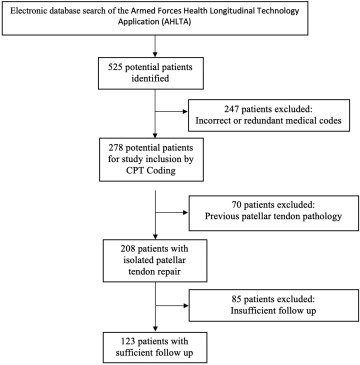 To evaluate 1-year outcomes in active-duty servicemembers who underwent patellar tendon rupture repair and to identify baseline variables associated with return to activity.

We performed a retrospective review of all active-duty servicemembers undergoing primary patellar tendon rupture repair between 2009 and 2014. All patients had a minimum 12-month follow-up. Demographic variables were recorded, as well as ability to return to impact activities and remain on active-duty status. Rates of recurrent rupture and revision surgery were identified. Univariate analysis was performed to assess relations between outcomes and baseline variables.

Level IV, therapeutic case series.
To read this article in full you will need to make a payment

The authors report the following potential conflicts of interest or sources of funding: B.R.W. is a board or committee member of American Academy of Orthopaedic Surgeons, AANA, and Society of Military Orthopaedic Surgeons; is on the editorial or governing board of American Journal of Orthopedics and Arthroscopy; receives publishing royalties and financial or material support from Elsevier; and is a paid presenter or speaker for Genzyme, outside the submitted work. Full ICMJE author disclosure forms are available for this article online, as supplementary material.