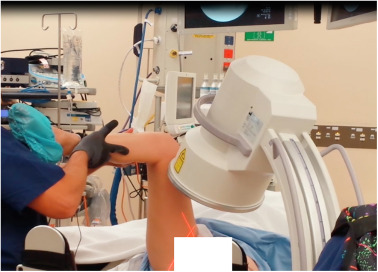 In total, 24 subjects diagnosed with FAI (21 unilateral, 3 bilateral) were prospectively recruited. A clinical impingement test was performed on both hips while the patient was awake and then while anaesthetized, and in the operative hip after arthroscopic osteoplasties and labral repair. Fluoroscopy was used to image the hip during the impingement tests. Images were analyzed using 3D-2D image registration to calculate joint kinematics. The examiner’s hand was instrumented with a glove to measure internal rotation torque applied to the hip during each test.

Arthroscopic osteoplasty and labral repair increased hip range of motion and reduced femoral head displacement from the acetabulum during the IR90 provocation test (i.e., hip flexion to 90°, maximum internal rotation) in patients with FAI. This suggests that the impinging acetabular rim acted as a fulcrum before surgery and may have caused edge loading that was reduced after surgery.

Two subjects were excluded from the study: one subject was excluded because they were subsequently found to have had previous hip surgery, and the other subject was excluded because no data were recorded. Demographic data for the 22 subjects who underwent testing are described in Table 1. There were 10 male patients, 12 female patients, 3 patients with bilateral FAI, and 19 patients with unilateral FAI, which comprised 11 left and 8 right hips.
Table 1Demographics of the Study Cohort (N = 22, 45% Male, 55% Female)
BMI, body mass index; SD, standard deviation.
Mean IHOT 33 scores improved by 9.2 (standard error [SE] 3.8) from 40.6 to 49.8 at 6 weeks after operation (P = .03). The preoperative scores for the first 2 domains of HOOS in symptomatic and contralateral sides were 49.9 (SE 3.0) and 97.1 (SE 0.9) (P < .001), respectively.
No significant differences in radiographic parameters (lateral center edge angle or alpha angles) were observed between the operative and nonoperative (contralateral) sides (P > .1). These measurements were not obtained for the nonoperative sides in 2 patients as contralateral images were not available. After surgery, the lateral center edge angle reduced by 4.7° (standard deviation [SD] 3.2°), and the alpha angle reduced by 5.3° (SD 8.4°), 12.3° (SD 11.4°), and 15.7° (SD 12.8°) at 12-o’clock, 1:30-o’clock, and 3-o’clock positions, respectively (Table 2) (P < .01). Femoral version in the operative hips was 9.5° of anteversion (SD 8.2°) and 9.5° in the nonoperative hips (SD 6.4°).
Table 2Mean (SD) Morphologic Measurements From Plain Radiograph and CT Scans of the Symptomatic and Nonsymptomatic (Contralateral) Hips Measured Before Surgery
NOTE. Alpha angles are described according to clock face terminology, where 12:00 o’clock is the most superior point on the radially reconstructed CT scans of the femoral neck.
CI, confidence interval; CT, computed tomography; SD, standard deviation.
The clinical impingement test, performed when the patient was awake, was positive in all 25 preoperative hips but in only 2 of 19 contralateral hips. Mean torque applied to the hip was greater in the operative hips when anaesthetized compared with when awake, by 5 Nm (SE 1.2 Nm) (P < .001), and greater in the contralateral hips than the operative hips when awake by 8.4 Nm (SE 1.4 Nm) (P < .001) (Fig 2). In total, 10% of torque measurements were missing due to recording errors. No significant differences in applied torque existed between the anaesthetized preoperative, postoperative, or contralateral groups.
The surgeon’s mean estimated arc of resection of the femoral cam lesion ranged from 10.4° (SE 5.4°) to 98.4° (SE 5.5°) and for the pincer lesion from 11.9° (SE 4.8°) to 80.6 (SE 3.2°). From the measured 3D kinematics, the mean estimated location of impingement was 64.1° (SE 6.8°) on the femoral neck and 16° (SE 3.2°) on the acetabular rim.
Average internal rotation significantly increased after surgery by 3.7° (SE 0.95°) in the symptomatic hips (Fig 3) (P = .001). In total, 18 of 25 postoperative hips demonstrated increased internal rotation. There were no significant differences in internal rotation between preoperative and contralateral hips. Adduction was reduced in contralateral hips compared with pre- and postoperative hips, but the difference was not statistically significant (Fig 3). Average flexion was greater in pre- and postoperative hips compared with contralateral hips but this was not statistically significant (Fig 3).
Average maximum total displacement of the femoral head out of the acetabulum was 4.0 mm (SE 0.5 mm) in the operative hip before surgery and 1.8 mm (SE 0.3 mm) after surgery (P < .001) (Fig 4). This was due to a decrease in lateral displacement by 1.3 mm (SE 0.4 mm, P = .002) and proximal displacement by 0.8 mm (SE 0.3 mm, P = .013) after surgery. Lateral and proximal displacements were significantly lower in the contralateral group than in the preoperative group by –2.2 mm (SE 0.6 mm, P = .001) and –1.8 mm (SE 0.6, P = .003), respectively, although no significant difference in total displacement was observed. There were no differences in anterior displacement between groups.

The results of this study should be interpreted in view of its limitations. The use of the proposed method for diagnosis of FAI in awake patients is limited because of the uncontrolled effect of pain on range of motion. Furthermore, the location of impingement on the acetabulum and femoral neck were estimated based on extrapolating the trajectory of joint motion until bony collision occurred. Precise contact location or pattern of impingement could not be determined because the dimensions of the femoral cartilage and acetabular labrum were not accurately defined by the preoperative CTs.

This study provided evidence that arthroscopic osteoplasty and labral repair in patients with FAI increased hip range of motion and reduced levering of the femoral head from the acetabulum during the IR90 provocation test. This suggests the impinging acetabular rim acted as a fulcrum before surgery, which may have caused significant edge loading, which likely reduced after surgery.

The authors acknowledge the significant contribution of Joe Lynch from the Trauma and Orthopaedic Research Unit at the Canberra Hospital, Glen Charlton from Canberra Private Hospital, as well as DePuy Synthes and Avant Mutual for sponsorship of the lead investigator’s research fellowship.

The authors report the following potential conflicts of interest or sources of funding: T.W. received a grant from Avant (indemnity insurer) for the research, during the conduct of the study. P.S. reports Avant Doctor in Training Research Scholarship, during the conduct of the study. Full ICMJE author disclosure forms are available for this article online, as supplementary material.