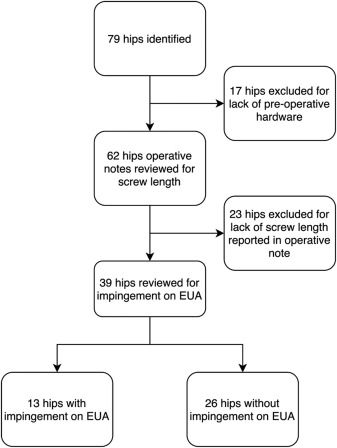 Hardware Impingement Is Associated With Shorter Screw Length in Patients Treated With In Situ Screw Fixation for Slipped Capital Femoral Epiphysis: An In Vivo Arthroscopic Evaluation

To determine the incidence of screw impingement on dynamic exam during hip arthroscopy in patients undergoing treatment for femoroacetabular impingement after previous slipped capital femoral epiphysis fixation and to evaluate screw characteristics with hardware impingement.

A retrospective review from 2008 to 2020 was performed of slipped capital femoral epiphysis (SCFE) patients that underwent arthroscopy for symptoms of hip impingement. Patients underwent a dynamic exam under direct arthroscopic visualization to assess for sources of impingement, including bony anatomy and fixation hardware. Slip angle was calculated on lateral radiographs prior to arthroscopy, and screw length was noted in the initial operative reports at treatment of SCFE and reported in millimeters. Normality of data was assessed using Shapiro-Wilk tests, with statistical analysis performed using independent sample t-tests, Mann-Whitney U-nonparametric tests, and multivariable logistic regression. An alpha level of <0.05 was used to indicate statistical significance.

Following Institutional Review Board approval (no. 71733), a retrospective query of the senior author’s (S.K.A.) surgical cases was performed from January 1, 2008, to December 31, 2020, to identify patients who underwent hip arthroscopy for symptoms of hip impingement and had a previous SCFE diagnosis. All patients were evaluated clinically and radiographically and were subsequently treated by the senior author for symptoms consistent with femoroacetabular impingement syndrome (FAIS). Inclusion criteria were 1) patients who were undergoing hip arthroscopy for impingement and 2) patients who were previously diagnosed and subsequently treated for SCFE. Exclusion criteria were 1) lack of screw hardware at time of hip arthroscopy and 2) no screw length noted in initial operative report from treatment of SCFE. Patient demographic characteristics were captured from the electronic medical record and included age in years at the time of hip arthroscopy, patient sex, body mass index (BMI), and operative hip side. Operative notes were also reviewed to identify reported screw length at time of initial SCFE surgery.

After induction under general anesthesia and application of sufficient traction force to produce adequate hip distraction, anteromedial and anterolateral portals were placed followed by completion of an interportal capsulotomy to allow for appropriate visualization during arthroscopy. Central compartment work was performed prior to addressing the peripheral compartment. Prior to the femoral osteochondroplasty, patients underwent a dynamic exam of the operative hip. The hip was ranged in flexion up to 90°, as limited by patient positioning and draping. Screw impingement was assessed under direct arthroscopic visualization and was noted postoperatively with all screws being removed by the senior author regardless of impingement status. Retrospective review of operative reports was completed to identify patients with hardware impingement.

Slip angle was calculated prior to hip arthroscopy for hip impingement by one of three study authors (D.C.L., A.K.M., D.L.F.), using established methods for calculation of the Southwick slip angle.
23
Osteotomy through the lesser trochanter for slipped capital femoral epiphysis.
J Bone Joint Surg Am. 1967; 49: 807-835
Lateral radiographs prior to arthroscopy were accessed through the institution’s picture archiving and communication system (PACS) IntelliSpace (Phillips, Amsterdam, Netherlands) to determine the slip angle at the time of hip arthroscopy. First, a line was drawn connecting the medial and lateral aspects of the proximal femoral physis or physeal scar, as indicated on the basis of on patient skeletal maturity. A line at a right angle was subsequently drawn to this first line (referred to as “right-angle line”). Another line was established along the central axis of the femoral diaphysis, with the angle between this line and the right-angle line calculated as the slip angle. Screw length was collected from operative reports at the time of treatment for initial SCFE slip and was reported in millimeters.

There are several limitations of the current study that warrant consideration. First, measurement of Southwick slip angle was difficult using available prearthroscopy radiographs, as most of these patients were skeletally mature with closed proximal femoral physes, limiting the precision of slip measurement. Second, we had considerable exclusion of our initially identified patients based on lack of screw length noted in the initial operative report, which may have provided additional insight regarding overall rates of screw impingement and screw length seen with impingement. Third, our study comprised patients who were treated at a single center by a single hip arthroscopic surgeon, which may affect generalizability of our results to a broader population. Fourth, the arthroscopic dynamic exam was limited to a flexion angle of 90° given limitations related to patient size, positioning on the traction table, and surgical draping. A dynamic exam at deeper flexion angles may demonstrate additional cases of hardware impingement.

The authors report the following potential conflicts of interest or sources of funding: S.K.A. reports personal fees from Stryker, Active Medical, and Smith & Nephew, outside the submitted work. Full ICMJE author disclosure forms are available for this article online, as supplementary material.

© 2022 The Authors. Published by Elsevier Inc. on behalf of the Arthroscopy Association of North America.