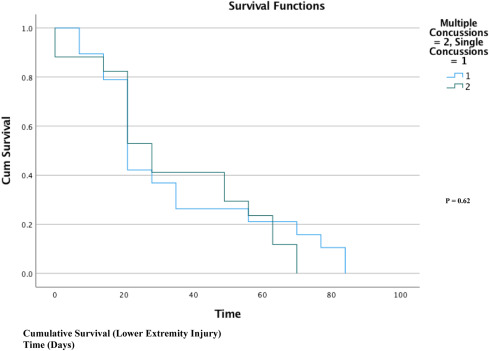 To investigate the effect of multiple concussions on the risk of lower-extremity injuries in National Football League (NFL) players.

All active NFL players from September 2016 to January 2017 through September 2019 to January 2020 regular seasons were eligible for inclusion. All players who sustained multiple concussions during the study period were identified using publicly available data and included in the multiple concussion (MC) cohort. Players who sustained a single concussion (SC) as well as controls were age and position matched to the MC cohort using MEDCALC case-control. Lower-extremity injuries were then documented for the players included in all 3 cohorts.

This study was a retrospective review of National Football League (NFL) injury reports including 4 seasons. The data were compiled using publicly available injury reports (Appendix Table 1, available at www.arthroscopyjournal.org). The sources used publish weekly injury reports detailing the name of the players injured, their corresponding teams, and a brief description of each injury. At least 2 different sources (NFL.com and pro-football-reference.com) were used to cross-reference injury information. To verify each player’s date of injury, we confirmed each player’s reported injury date corresponded to an absence of statistics from the respective games for which they were ruled out. These methods of collecting publicly available injury data are in accordance with previously published investigations.
7
Rate of return to pitching and performance after Tommy John surgery in Major League Baseball pitchers.
Am J Sports Med. 2014; 42: 536-543
,
8
Ulnar collateral ligament reconstruction in major league baseball pitchers.
Am J Sports Med. 2007; 35: 575-581
,
9
Performance, return to competition, and reinjury after Tommy John surgery in Major League Baseball pitchers: A review of 147 cases.
Am J Sports Med. 2014; 42: 1323-1332
,
10
Implications of core and hip injuries on Major League Baseball pitchers on the disabled list.
Arthroscopy. 2018; 34: 473-478
,
11
Playing rule article eight decreases the rate of sport related concussion in NFL players over two seasons.
Phys Sportsmed. 2021; 49: 342-347
,
12
Is average club head speed a risk factor for lower back injuries in professional golfers? A retrospective case control study.
Phys Sportsmed. 2021; 49: 214-218
,
13
The targeting rule does not increase the rate of lower extremity injuries in NFL players over two seasons.
Phys Sportsmed. 2022; 50: 239-243
,
14
The NFL's chop-block rule change: Does it prevent knee injuries in defensive players?.
Orthop J Sports Med. 2018; 62325967118768446
,
15
Does the MLB's collision at home plate rule change prevent concussion injuries in catchers?.
Phys Sportsmed. 2020; 48: 354-357
,
16
Thursday Night Football's impact on all-cause injuries in NFL players during 2012-2017.
Phys Sportsmed. 2019; 47: 350-352
All active NFL players from September 2016 to January 2017 through September 2019 to January 2020 regular seasons (6,784 athletes) were eligible for inclusion. All players who sustained multiple concussions during the study period were included in the MC cohort (55 athletes). For the purposes of this study, athletes who sustained a SC injury during the study period were eligible for inclusion in the SC cohort (352 athletes). We understand that players included in the SC cohort may have sustained a concussion during their football career outside of the study period. However, athlete records while playing at the high school and collegiate level are not publicly available; thus, our data are limited and should be interpreted as such. Athletes who sustained a concussion during the season 1 year before the beginning of the study period were excluded to control for recent past concussions. We then age- and position-matched players in the SC cohort to the MC cohort. A control cohort also was established by age and position matching NFL players who did not sustain a concussion throughout the study period to the MC cohort. Lower-extremity injuries were then documented for players included in all 3 cohorts. As mentioned previously, Brooks et al.
2
Concussion increases odds of sustaining a lower extremity musculoskeletal injury after return to play among collegiate athletes.
Am J Sports Med. 2016; 44: 742-747
and Herman et al.
3
Concussion may increase the risk of subsequent lower extremity musculoskeletal injury in collegiate athletes.
Sports Med. 2017; 47: 1003-1010
both demonstrated that athletes had greater odds of sustaining a lower-extremity injury in the 90 days after RTP following concussion. It is unclear how long the risk of sustaining a lower-extremity injury persists after concussion. Given the NFL regular season is approximately 5 months in length, we choose to include all lower-extremity injuries that occurred during the remainder of the season following sport related concussion.
Team records available on individual team websites were used to document demographic information. Our dataset included each player’s name, position, team, pathology, age at injury, date of injury, season, number of weeks missed due to injury, and date of RTP.

Reportable injuries were based on the criteria that the injury necessitated a team physician referral or emergent care and resulted in a missed game. Players were assessed by their respective team medical staff, which typically includes an athletic trainer, as well as team physician (M.D. or D.O.), and neurologist (M.D. or D.O.). Preseason games were excluded from investigation to account for the potentially different level of competition during this time period, as starters typically do not play as many minutes during the preseason compared with the regular season, as well as for the inability to track players lost to follow-up due to being cut from the team before the regular season. However, we did confirm that athletes included in the study did not sustain a lower-extremity injury or concussion during the preseason. In addition, postseason play was excluded so that all teams had equal representation throughout the study period to eliminate potential confounding of injury rates due to team-specific playing style. Concussions were diagnosed in accordance with the NFL Head, Neck and Spine Committee’s Concussion Diagnosis and Management Protocol.
17
National Football League Head, Neck and Spine Committee's Concussion Diagnosis and Management Protocol: 2017-18 season.
Br J Sports Med. 2018; 52: 894-902
An athlete-exposure was defined as one athlete’s participation in one game in which they were exposed to potential injury.

All active male professional football players participating in the 2016-2017 through 2019-2020 NFL regular seasons were eligible for inclusion as age- and position-matched controls. Football players included in the SC or MC injury cohort were excluded from the control group. An online search was performed to determine whether any football players in the control group had sustained a concussion during the study period. The primary sources used to gather this information is listed in Appendix Table 1. Football players who were identified to have sustained a concussion injury were excluded from the age-matched control group. The MEDCALC case-control matching procedure was used to randomly match cases and controls with a 1:1 allocation ratio, respectively, based on age and position (MedCalc Software Ltd., Ostend, Belgium). We chose to age- and position- match controls in order to minimize selection bias. By position-matching controls, we attempted to control for positions that sustained lower-extremity injuries at a greater rate.

Data analysis was conducted using SPSS 25 (IBM Corp., Armonk, NY). Baseline characteristics were compared using a combination of 1-way analysis of variance and χ2 tests. Average number of games missed, and number of players placed on injury reserve (IR) per year were also calculated. Binary logistic regression was used to calculate odds ratio (OR) associated with number of concussions (continuous predictor variable) and presence of lower-extremity injury (binary dependent variable). Kaplan–Meier and log rank test analysis were used to compare time-to-event for lower-extremity injury occurrence following concussion in the SC and MC cohorts. Participation of a given player for more than one season was handled in the following manner: players who sustained MC throughout the study period were included only within a MC cohort, there was no crossover between groups. Survival curves were generated and censored to 90 days, 1 year, and the study duration for each athlete. Statistical significance was set at P ≤ .05 and associated 95% confidence interval.

This study, as well as other similar publications using the well-established multistep protocol to identify injuries in professional athletes through review of public records, is associated with several well-recognized limitations. Details regarding injury diagnosis and management, including injury severity, exact pathology, imaging reports, and exact medical clearance, were not available for all players. Because injured players were identified using public records, the possibility of reporting errors, and omissions exist. We attempted to minimize this limitation by further describing the injuries in our results when further details were provided on the injury report. However, there may be under-reporting of specific injuries in our data. Our results should be interpreted with this in mind. Exclusion of preseason injuries is a major limitation, given the short timeframe of the study with a small number of cases; however, we choose to exclude these injuries as the level of competition during the preseason is variable as starters typically do not play the whole game, and players are often lost to follow-up due to being cut from the team prior to the regular season (37 players cut during the preseason on each team, each year). We also are unable to capture subconcussive injuries that are not formally diagnosed or concussions sustained by players during their football career outside of the study period. Athlete records while playing at the high school and collegiate level are not publicly available, which limits our ability to capture these injuries. In an attempt to control for recent past concussions, we did exclude athletes who sustained a concussion during the season 1 year before the beginning of the study period. Selection bias may have influenced our results in that the more players see the field, the more likely they are to sustain a concussion injury, as well as a lower-extremity injury. Finally, there remains the possibility of selection bias in the injured group in which only “newsworthy” players injured were reported on. We attempted to control for this selection bias by only including regular-season games to account for the inability to track players lost to follow-up due to being cut from the team before the regular season. Further, an attempt to minimize this bias was made by corroborating reported injuries with 2 additional resources, but the data is limited by what is publicly available. The short study timeline is a significant limitation, spanning only 4 NFL seasons, and the biggest difference between our study and Harada et al.
1
Multiple concussions increase odds and rate of lower extremity injury in National Collegiate Athletic Association athletes after return to play.
Am J Sports Med. 2019; 47: 3256-3262
This is a significant limitation because, given how common concussions are in football players, it is likely that a majority of the players included in this study sustained a concussion at some point during their high school, college, or NFL career that was not captured by our data. Unfortunately, it is impossible to longitudinally follow NFL players for their whole football careers to get a more accurate assessment of their career concussions. However, the average NFL career, as reported by NFL.com is 3.3 years. Thus, our dataset is similar in length to the average player’s career, which we felt was adequate.

The study was performed at The University of Chicago, Chicago, Illinois, U.S.A.

© 2022 The Authors. Published by Elsevier Inc. on behalf of the Arthroscopy Association of North America.